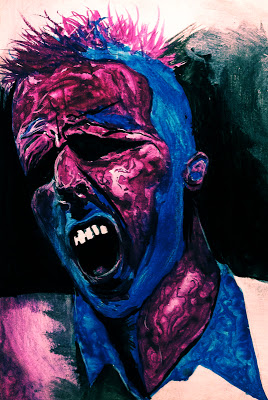 Bashir Muhammad knows every avatar of fire. When he was 23, he made love to a Djinn in the alley behind The Sultan of Swing Jazz Club. Djinni are fire made flesh, and Bashir’s flesh was bathed in that fire until his skin bubbled and his nerves sang confused rumors of frostbite. By the time he could bear to open his half-melted eyelids, his lover had gone up in smoke. “Literal smoke,” he would tell friends for weeks after, in a voice that seemed incapable of anything below a scream.

That furtive rendezvous with the djinn ignited a corresponding fire in Bashir – a tumor of red heat that grew in him like the glowing eye at the tip of a cone of incense. It spread from his heart outward, reaching with rosy fingers to touch the perpetual fire in his scarred skin, which never healed. His constant screaming increased in pitch and volume, until screaming was no longer enough, and he began to sing.

That’s what they say, anyway, and how else do you explain the music he makes? The stuff that leaves whole stadiums feverish, frantic dancers collapsing beneath thick clouds of sweat? They say he’s lost seventy-four fans to heat stroke so far, and his tour is far from over.

He’s hell to manage. He can’t negotiate contracts – can’t even read the things through the flames in his black-brown eyes. He lives lavishly because his handlers know it’s their job to keep him alive, to give him something to consume besides himself. The fans know they’ve only got so long to see him before he crumbles to ash. They know, too, that no matter how red his voice glows in the furnace of his throat, what he’s singing is the very definition of the blues.