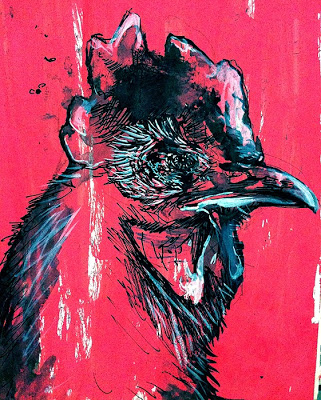 Garfield is big for his age. He has a barrel chest, a martially erect posture, and feathers orange like the sun seen through a piece of root-beer candy. He’s eaten his share of root-beer candy. Potato chips, too. He rips apart disks of salami, and enthusiastically pecks away at clouds of cream cheese, so that they vanish to nothing by pinpricks. He eats, in short, anything that they bring him. In the morning, when he has not yet had his breakfast, he reprimands his many keepers with adolescent squawks still struggling to navigate the architecture of his throat. He is the triumphant boy-king of the Park, and he will accept no excuses.

Roosters don’t have much of what we call memory, so there’s no point inquiring about where Garfield came from. Instead, look at where he is: perched atop a one-man shanty built of cardboard and carpet remnants, in the exact center of a public park, in the exact center of the most notorious drug spot in the city. The neighborhood is named after the park, which is named after Garfield – you might say it’s the other way around, but Garfield would peck your eyes out if he understood what you were saying.

Garfield belongs to the pockmarked patriarch who owns the shanty. The man is a sort of father to the junkies who congregate in this shaded section of the park, offering them a place to fix away from prying eyes, a place to do deals -as long as they don’t fight too loud – and a place to sleep on nights when they can’t make it anywhere else. Garfield is familiar with the needle and lighter, the scraps of cylindrical glass repurposed for crack pipes, the inedible crumbs dribbled out the open ends of hand-rolled cigarettes.

He does not mind these things, or particularly care. They are not edible, and so he busies himself with other things. Whatever else might be said of the junkies, they keep him fed. And when they don’t, he picks fights with the pond-rats and squirrels for their meager takings. He is a brilliant alien in their midst – a natural-born king if only because they do not understand what else he could be. He is not even old enough yet to fear the Chicago winter, and when he folds into himself to sleep each night in a plastic crate beneath his master’s pillow he does not dream, because he cannot imagine a richer life than the one he leads. You might say that’s because roosters haven’t got enough imagination to be discontent, or to dream. But if you did say it, it’s not as if Garfield would understand you.