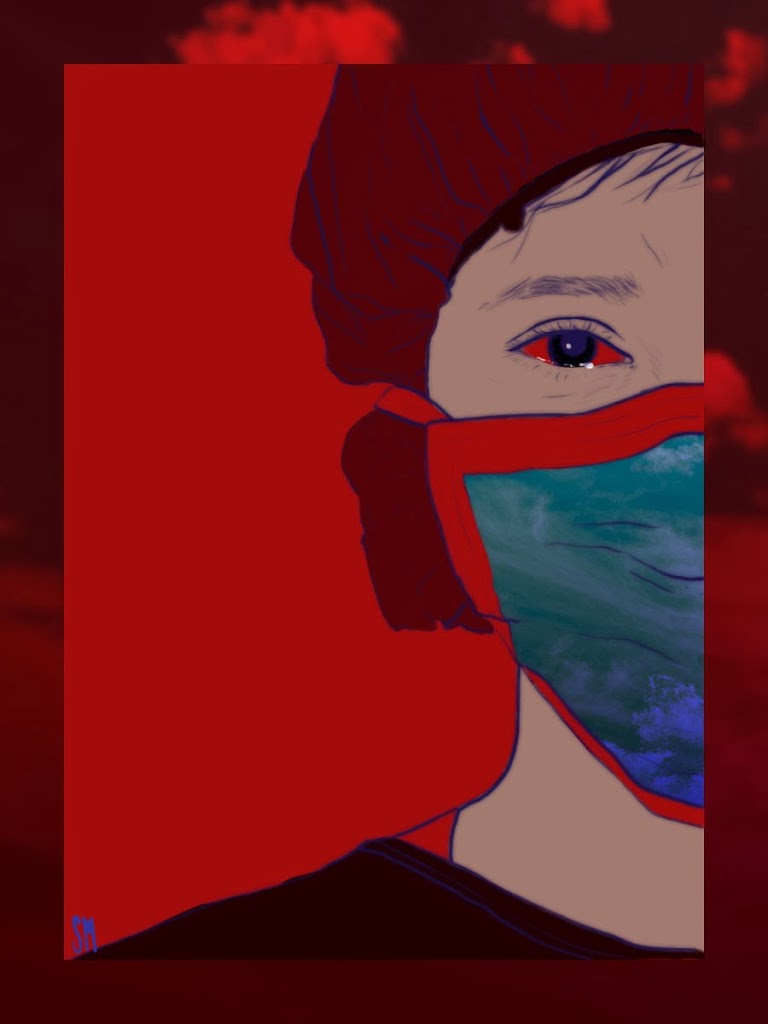 At another time in history, Juanzetta would have been labeled a witch based on her nose alone, and her sense of smell would have got her burned. The last things she smelled would have been the sap-soaked vapor boiling from the still-damp wood, wet red fumes popping from the small animals trapped inside, the rough, acidic sting of smoke, and finally herself, digested by the flames in layers. And then she might have sneezed, and with her nose being what it is, that might have saved her.

Instead, she’s a nurse practitioner. She wears a surgical mask all shift, special order ones with a cloudy blue sky on them. She wears the masks because her face scares patients fresh out of anasthesia, and because the hospital is overwhelming. When humans are upset, near death, aroused, excited, they release chemicals to tell each other so. Most of us perceive these chemicals as inexplicable emotions, just “something in the air,” but Juanzetta can trace the something to its source, and decode it. She doesn’t like to do this in the hospital. It feels nosy.

Outside of the hospital, she’s a killer cook. At least, other people like her food. To her, it never lives up to the level she’s capable of perceiving. She is a good listener, though she’s practically deaf in one ear. She ignores the words and listens to what her partner’s pores are saying. She can smell a lie, can sniff out the truth, and always knows who dealt it.

“So why the hell do you work here?” her co-workers on the night shift ask her. They swear within earshot of the patients because it is a very busy hospital, and the patients understand. “You’ve got this beautiful fucking gift. You could go to med school and sniff out cancer, or be a baker, or … shit, design a line of perfumes. Why here?”
“Because,” says Juanzetta, a bit nasally through her mask, “I want to be known for something other than my god-damn nose.”

Teo Lind will never learn to fight. That’s his promise to himself. To learn to fight would be to dilute the purity of his strategy for living. A thrown punch, to Teo, is an admission of intellectual defeat. He has collected many such admissions.

Teo bruises easily. He appears to wear the same overshirt every day (though in reality he owns seven, all identical). His hand is always the first in the air when the teacher asks a question. And he is vicious. Poetically vicious.

There is no barb for which he does not have an even sharper retort. There is no soul his predatory intellect cannot penetrate. He watches his tormentors, researches them, and rains words like shurikens, all without compromising his perfect posture. He can drive a boy to strike him in seven words. And when the blow comes, he adds it to his mental tally. He wears his cuts and bruises with un-ironic pride. He knows, you see, that when his attackers look upon his healing wounds, they will recognize them as pale echoes of the wounds he has inflicted on their spirits. 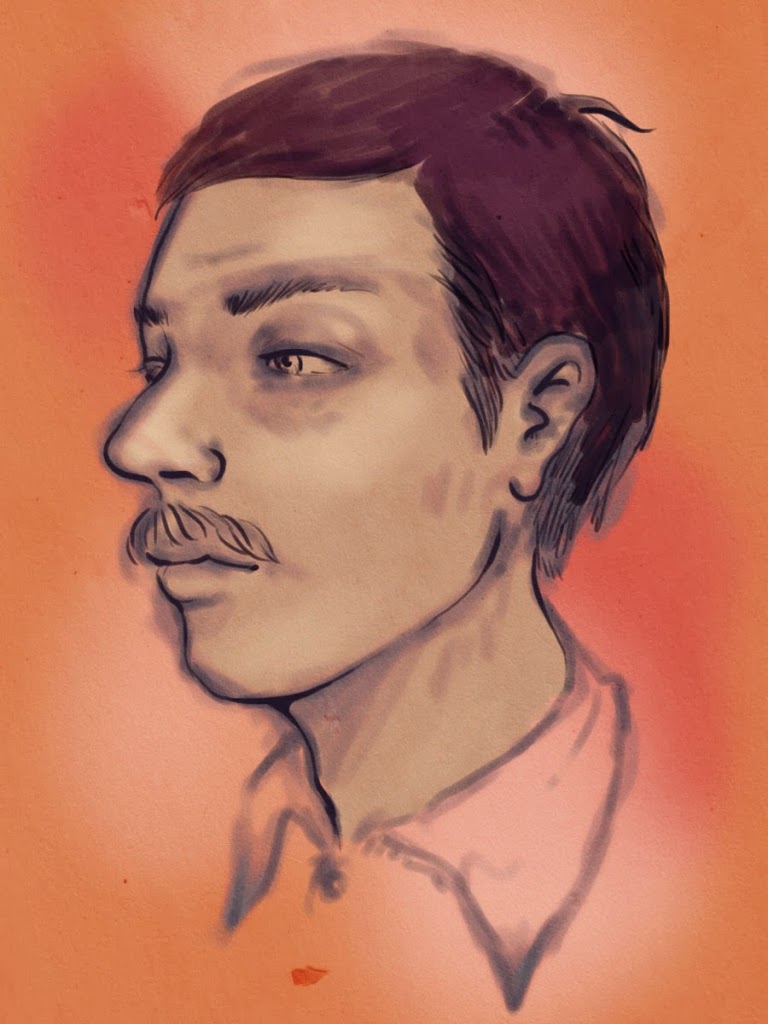 If you asked Sangerian Jones that poisonous, American question, “What do you do?” he would look at you as if you’d mis-spoken. He would smile politely – and you would notice how straight and white his teeth were – and give you ample opportunity to correct yourself. Sangerian has a job – usually, probably – but it’s never anything worth talking about, and everything else he does is entirely fluid, because it depends on who he is currently loving.

Sangerian is in love. If you read these words a decade from now, he will still be in love, perhaps even with the same person. His body is built for love. He has a love-based metabolism. He can go without food for days and sleep for nights, and something in his tears makes his baby-smooth skin even smoother when he cries. He does not change for his lovers. He does not shave his mustache or alter his plain dress. He only opens himself, gives his lover root access to his soul, with the puppy-dog trust that they will leave him as they found him. And his lover finds in him, invariably, a large partition devoted entirely to her or him.
He never escapes these entanglements unscathed. He never escapes them at all. He is always left, never leaving. And each lover leaves inside him, not a scar, but a sketch. Etched upon his vulnerable insides are all their faces, smiling un-self-consciously, speaking secrets only he was ever close enough to hear. 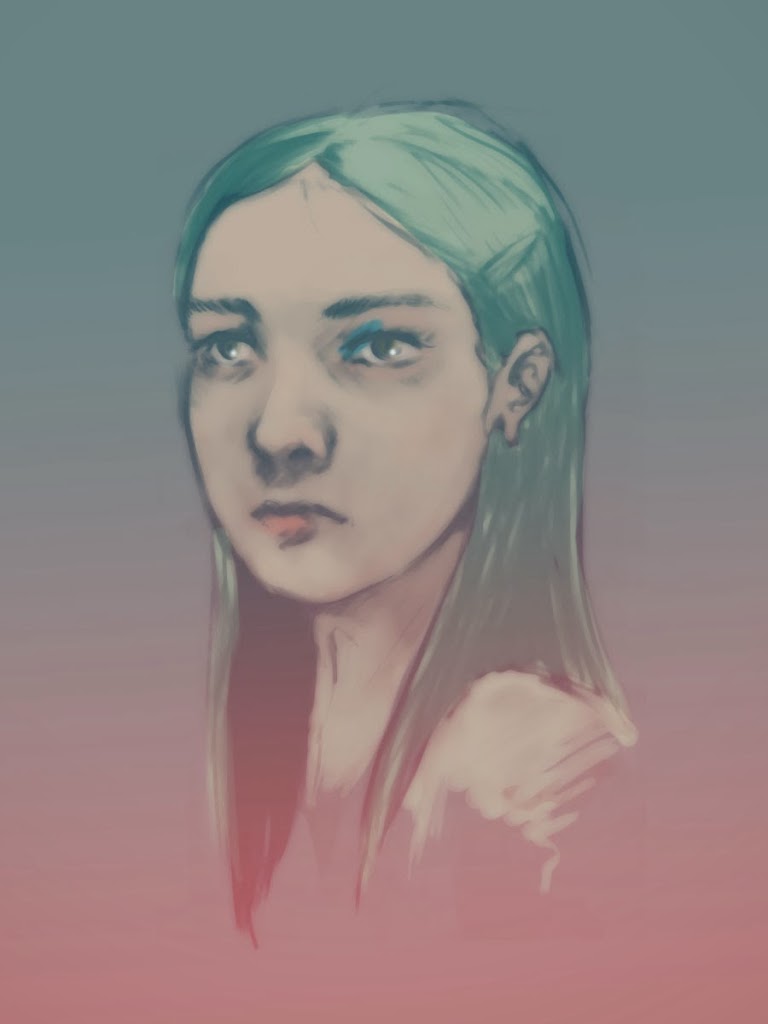 Lana is a mermaid, she just needs to get the surgery. She’s already dyed her hair and stopped wearing clothes most of the time. And every day she takes the bus out to Santa Monica to walk the beach, even though it’s two hours each way and she can’t stay past 6:30. It’s better than nothing, until she gets the money together.
Lana lifeguards at a public pool in Pasadena, and even when she didn’t dye her hair, it was always half green. Chlorine does that to blonds. She never raced, and she doesn’t swim laps. She dives deep down and glides in lazy circles beneath the kicking feet, until her lungs feel bruised and the water digs its thumbs into her eardrums. She gets a lot of ear infections.
She doesn’t much like fish – to eat or to look at – but she figures that won’t be a problem. Mermaids keep their own company. She knows she’s a mermaid because of the quiet familiarity of deep water, and the well-known fact that mermaids have no souls. So she walks the beach each afternoon til six fifteen and waits, for her bank account to fill up, and for someone to invent the surgery. 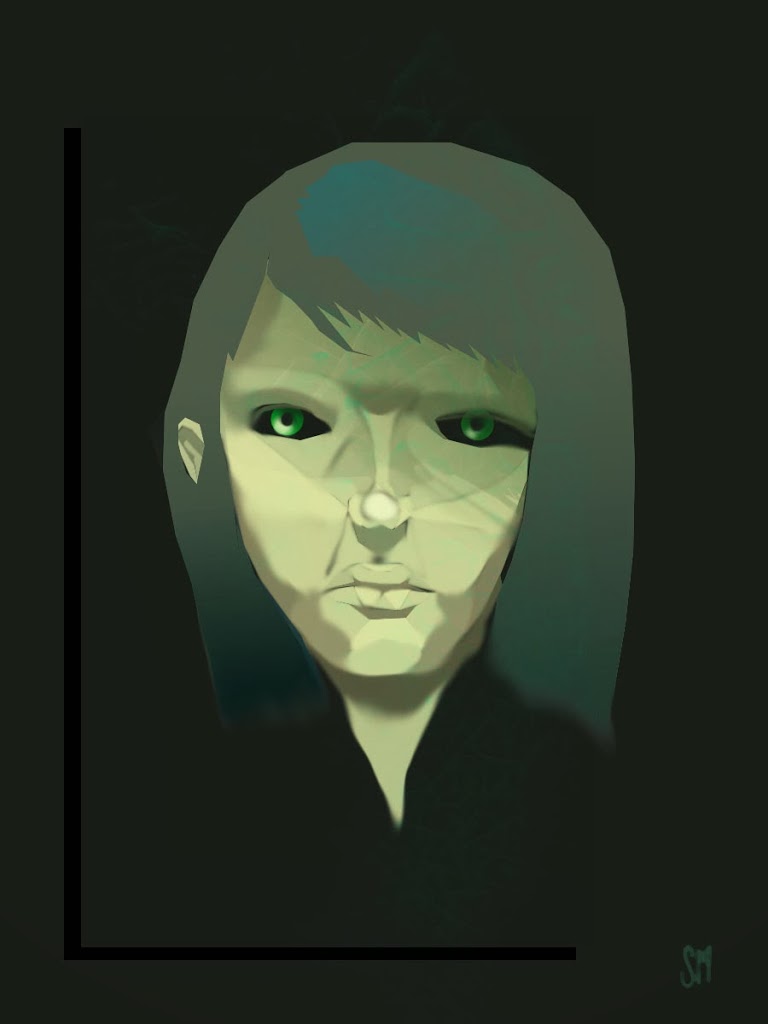 [Today’s face brought to you by guest artist Soren Melville!]

Sheila Spacey is an architect. Her hair reflects this. She practically shellacs it, and trims the results like topiary. The hard angles and geometric protrusions bespeak her personal design philosophy, as do the bright colors. She doesn’t dye her hair. She uses wood stain.

Architecture is a recent thing for Shiela. Before this, she made her living as an artisinal gift-wrapper. She was renowned for her deft fingers and audacious design strategies. Some of her creations were so flamboyant that they were impossible to lift or move without damaging – the clients had to open the gifts in her studio. At her clients’ request, she occasionally gift-wrapped the wrappings of gifts she had wrapped. Sometimes the boxes she wrapped were empty. All in all, it was a bit of a disappointment when she decided to go into architecture.

She’d fallen in love with the craft via the interior design magazines she sometimes cannibalized for her wrapping. Enough with wrapping things, she wanted to wrap people. Her clients pled with her, implored her to consider the fates of their future holidays, but she ceased to take commissions and poured her earnings into design school.

Now she answers phones at a rather prestigious firm. Occasionally she will be called in to draw something someone else has designed, or to cut out a stencil. She is not very well liked. But each month she bathes her hair in mineral spirits and constructs a new labyrinth inside it, to show them the wonders she is capable of.