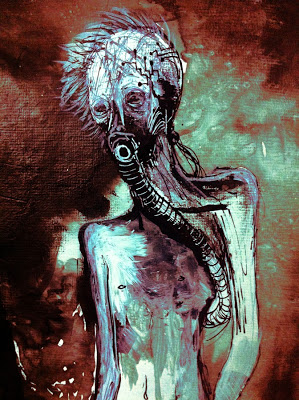 Poetry is a hell of a drug, but even a die-hard addict will warn you against scripture. Scripture, for God’s sake – the stuff that started all those wars and religions, and you’re gonna beam that shit straight into your cortex uncut? Insane, that’s the only word they’ve got for it, and you better believe the poetry-addicts know them some words.

Fuck ’em, says Joe, and does it anyway. Been doing it for decades, longer than some of those junkies even been alive. He’ll sit for hours on a plastic crate on the second floor of the empty tenement they all share, head hung low and seeing sermons. His Kortiko is an old one, a mosquito-whining relic that clings to his half-shaved scalp with sucker feet. Has to be old – they build limits into the new hardware specifically to stop shit like this. He loads whole sacred codexes onto the thing and lets the neuristors translate it into a synaptic-spike language his brain can metabolize. He lives the visions of the prophets in real time, high def, twenty-four seven.

And in spite of this, he takes care of the other ones. Shows up some days with whole cakes from Lord-only-knows-where, hands them around between stupors. Teaches the younger ones how to spoof blown-out contacts in their Kortikos with gum wrappers and an exacto knife. And when they brag about the monitor they just shoplifted, or throw a wild tantrum because the flash drive they copped is corrupted, he looks at them from under heavy lids and

And when they get embarassed by his candor, when they turn that brittle rage on him, try to protest or shout him down, he just shakes his head and says, with periods like paragraph breaks,

“It’s not about that.
It’s not from me.
I’m just delivering a message to you.
From god.”

Then he lapses into open-eyed sleep and says nothing.

Guy like Joe might have been a prophet himself, back when that kind of thing was big business. It’s tough times for revelation, though. These days the best he can do is sit tight and watch his predecessors on the instant replay.