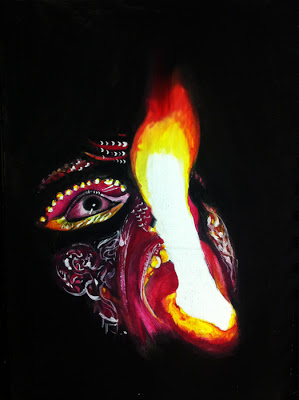 For all the towns and hearts she’s set ablaze with her performance, Kali Durga’s name is the only element of her that remains consistent across all of them. She appears in a dazzling variety of  costumes – gifts from her lovers, lucky finds, windfall purchases, pasted-on scrap leather, improvised hurricanes of repurposed curtain-fabric bright as the fire she eats. Her face is always painted. When she runs out of a certain color, she replaces it with a new one, so that her pallet shifts gradually across a neon spectrum. If she were on the run from something, hers would be the perfect cover.

From Tokyo to Topeka, the women she leaves behind perpetuate her legacy, and only her name marks their stories as parts of the same story. They describe her clothes, her face-paint, the constellations of fire she weaves about her with her props, but never anything she can’t change. When she dances, she blinds her audiences with flame, and when she makes love she is always back-lit. She is reluctant to let anyone see her until she’s figured out what she’s supposed to be.