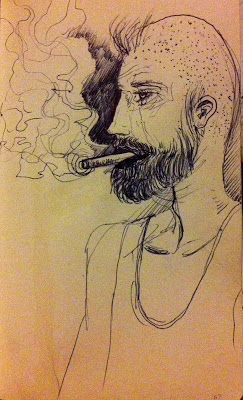 Scott stopped wearing his button-down to work a while ago, but his bosses don’t mention it. For one thing, his job is to talk on the phone all day. For another, he’s a volunteer. Anyway, if they were going to quibble about anything, it would probably be his hair.
Scott started work at the suicide hotline with a full head of hair. He’s been shaving off half an inch every week since then, from back to front. He volunteers seven nights a week, from 11PM to 7AM. He goes home to his two-bedroom apartment, and sleeps all day, and no one else comes home. He pays rent with the savings from his last job, bartending on the North Side. He quit that job just before he started work at the hotline. That was months ago, and at this point he’s got about enough money left to last him through the week. Most of the money goes to rent, frozen pizzas, and cigarillos.

Before he was a bartender, Scott was a carpenter’s apprentice. He’d spend the summer building decks, and only turn to bartending when it got cold out. Then he started slipping. Changed phones and lost the number of the carpenter he was working for. Started staying behind the bar year round, year after year, until half a decade had disappeared into the middle-distance between his customers’ anonymously smiling heads.

Five years since he’s worked as a carpenter doesn’t mean he doesn’t practice, though. In his living room – the one nobody goes in anymore – he’s built a scaffold. He plans to hang himself from that scaffold, when the money runs out and the last of his hair is gone. In the meantime, he spends his nights on the suicide hotline, saving lives. Racking up a reverse bodycount to counterbalance the acknowledged selfishness of his decision. Practicing, for an audience of a thousand anonymously weeping voices, an arrangement of words that might make even him reconsider.

One thought on “31. Scott Reyshus”