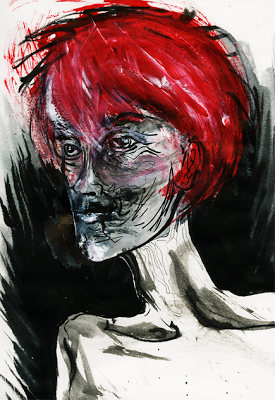 Riley is really more of a girl’s name, if you think about it, and so Miss Washtenaw prefers to go by “Riles.” She got the nickname back in her twenties, on account of what she’d do to men. She stopped doing it at thirty-three when she got married, but the name stuck. Now she’s fifty-two years older than that, and she’s the closest thing this town has to a witch.

Which is not to say she’s ugly. She wouldn’t have the nickname if she was. She wears her hair short now, and age has had the effect of sanding off the unnecessary parts of her. She weighs eighty pounds soaking wet, and on the backs of her hands there’s not a vein you can’t see. It’s not that she’s mean, either. She’s got more smiles than frowns etched into that streamlined hatchet-face of hers. It’s just how she is with the plants.

Courting was most of what Riles did, and when she got married she found she had nothing to do. She had kids, sure, but she took care of them with the same absent-minded ease she took care of her tables in the diner where she used to work before getting hitched. She had to fill the time somehow, so she took up gardening. Or really, she spent a lot of time trying to kill herself.

That’s what she’d do. She’d go out in the backyard – at that time a slimy mud-pit twenty feet on a side – and just put things in her mouth, hoping to die. She must have developed some sort of truce with the swamp in those days, or else the plants got the impression she was too crazy to fuck with, or else the knowledge she gained from her … experiments gave her a hard-earned green thumb.

Nothing grows in this town, except in that 20 by 20 square behind Miss Washtenaw’s place. She doesn’t plant seeds. She searches the muck for the beginning of something she might like, and she helps it live. She makes deals with the creepers and the pitcher plants and the poison ivy. Only good bugs cross her fence. And she knows what every plant in that garden will do to a body …

All this to say, nobody ever asks her what happened to Mister Washtenaw all those years ago.