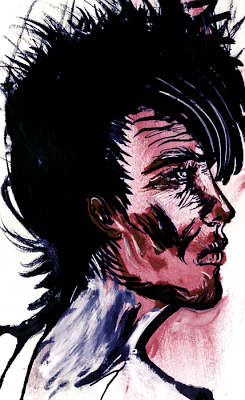 Tony makes his money on the bass guitar, but his passion is astronomy. He slumps through his sessions, his swoop of black hair hiding his whole head as he searches the carpet with unseeing eyes. He does not need to look up. Barely needs to listen. Tony has perfect pitch and an unerring internal metronome, and if you’ve listened to a jazz, funk, rock or blues track produced in the last decade, chances are you’ve heard him.

Here’s the thing, though: Tony’s blind. Or, near enough. When he was ten he got it into his head to try and see the shape of the sun, and now it’s like he goes through life with shades. He’s got to peer real hard at his sheet music to understand. The skin around his eyes is creased from the strain. Makes him look older than he is. He’s only thirty-two.

The plus side is that the damage is already done. Tony can stare at the sun all he likes now. The dimness of his vision protects him. And he likes to stare. He’ll be walking down the street when suddenly he’ll stop. Turn to watch the sun fall below the horizon. Not move until it’s dark out and he has to feel the walls to find his way home.

When he gets home, he climbs to the roof. He knows the number of rungs on the ladder by heart, and as he climbs them the taps on his boots make them ring in perfect rhythm. Then he opens a thermos of coffee and fires up the radio telescope. He builds images in his head out of coordinates, hears music in the cosmic background radiation. When he gets back inside, he cranks the brightness of his captured images up all the way, and stares.

Among music producers, Tony’s widely known as the best session bassist in the world. It pays his bills. That’s not why he does it, though. That’s not why he put in the ten thousand hours. He did it because he knows that one day some re-purposed airline is gonna send up a luxury space shuttle, and that shuttle’s gonna need a band.