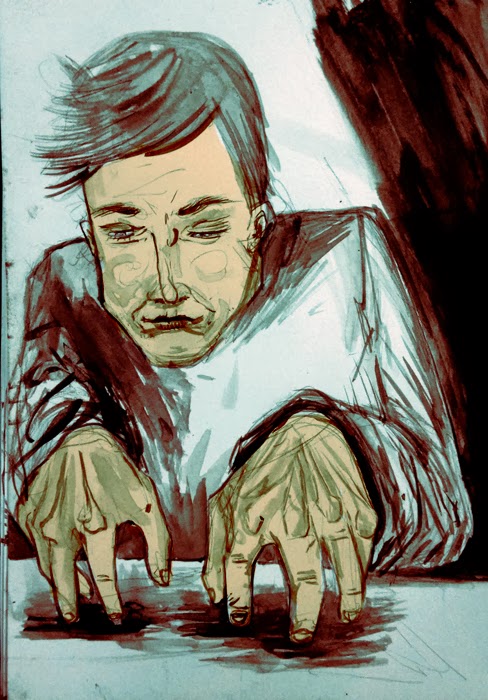 Hoder Peng hates his giant sausage fingers. When he was married he had to have the ring specially made. Then came his wife’s nightmares: their unborn children’s skulls crushed, brains oozing from his clenched fists. He left the ring on for a year after she left, and when he finally let it go, they had to remove it surgically. His hands are not strong, nor are they clever. They are blotchy red and slick with sweat. For fifteen years, the only job he could get was demolition.

Hoder’s best memories are from childhood – from back before his body stopped growing and his hands didn’t. He would lean inside his family’s mis-tuned grand piano while his sister practiced, and watch the hammers bounce against the strings. He smashed open a ceramic music box once, and took the mechanism out. Even then his hands were too clumsy to disassemble it, but he stared at the tiny crank and harp and pock-marked spool until he could take it apart and put it together in his head. He had visions in which pocketwatches rebuilt themselves and ships sailed in and out of bottles to the tune of music boxes.

These same visions followed Hoder through years of demolition. The watches and ships became circuit-boards and microchips, growing smaller and smaller but never losing the crispness of their details. When hardware reached a molecular level, he could no longer make excuses to himself. He purchased a hobbyist’s kit. He had to solder his own plus-size control pad to work the tools. It took him nine months. His hands blistered and cracked.

He doesn’t even have that control pad anymore. The company he works for commissioned a master craftsman in Japan to make him a proper one, all polished wood and brushed steel buttons, with an electric dexterity unlike anything he’s ever experienced. He’d be tempted to smash it open and see how it works, but he’s much too preoccupied with his work. Now he spends his days stacking atoms with gleeful precision, building machines worlds smaller than any imperfect molecule of his sausage fingers.