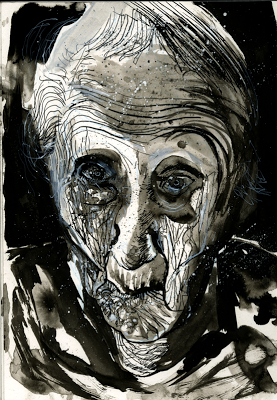 She won’t tell them her real name, so they call her Grandmother Dust. She won’t tell them her name, not because she can’t remember, but because she refuses to be tied to anything she used to be. There was a time, not so long ago, when she believed that she had reached the end of her history, that she would accomplish nothing more of consequence in this life. She predicted for herself a dwindling half-life, sitting in a rocking chair unable to talk of anything but what once was. She refused this.

Alzheimer’s, they call it, and a disease. They assume she values the same things they do. But she has simply broken the habit of remembering. If she tried, really tried, of course she could remember. Instead, she sits propped up on the eastern edge of her enormous canopy bed – anyway, she assumes it’s hers – and draws patterns in the dust on the bedside table. She watches the gray film gradually accumulate on all the bizarre knick-knacks in the room: a globe, a mandolin, a taxidermied crocodile, an unfinished painting of an enormous, dessicated hand, beckoning…

People come and bring her food. They attempt conversation, but have difficulty sustaining it. They are all so dreadfully intent on discussing the past, and she has nothing to say about it. When they are not on about the past, they want to know her opinion on their futures, as if she has some special insight. But how can she talk of futures when the dust-currents in the sun-stained air surprise her constantly?

Instead, she describes to them the grandfather clock by the door, or the teeth of the crocodile, or the timbre of the young boy’s voice outside the window, yelling in a rapid, yodeling language she might once have understood. They do not hear her. They are too busy twisting her words into answers. Then they leave, and the tunnels their bodies cut through the dust heal immediately behind them.