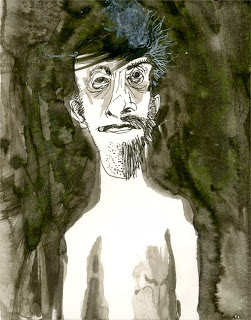 Ronald Nurgle has got the secret to immortality, and he’s not sharing. Well, he would share, probably, except he doesn’t really know anybody worth sharing it with. Most people think Ronald is pretty stupid. That’s because of his secret.

Ronald hasn’t finished a damn thing since he was twenty years old. Not a book, not a job application, not even a sandwich. He doesn’t even finish his thoughts. The space between Ronald’s ears is a wasteland of half-formed sentences, their purposes now unfathomable. He works odd jobs – construction, mostly – and he always leaves early.

He never sleeps through the night, and he rarely sleeps in the same place twice. He dreams in wireframe and storyboards, and wakes up suddenly. Then he’ll wrestle free of whatever trash-nest he didn’t finish building for himself, and walk the streets. Sometimes he spends weeks marooned on the same city block, reluctant to finish crossing the street.

The people who know him have a kind of fondness for him, though none of them can figure out why he’s not dead. All the bums who have just a little more money than Ronald like to buy him a beer or a sandwich every once in a while, knowing he won’t finish it. They learn not to be disturbed by the way his sentences always trail off. Some even learn to finish them for him. The conversation’s always a little one sided, but Ronald does seem to listen.

And Ronald does listen. He listens and he watches, because listening and watching are two tasks that can never be finished. He listens to his friends complete the arcs of their conversations, and watches them drift away to other tasks. He watches the horizon give birth to the sun in the morning, and receive its corpse at night. He stands on streetcorners and observes the uncountable tiny deaths that men call resolution. This is his secret. By never finishing anything, he’s made himself into a living manifestation of Zeno’s paradox. As long as he keeps it up, he will always be asymptotically approaching the end. And if by some mistake he ends up dead, his glut of unfinished business guarantees him at least a ghosthood.