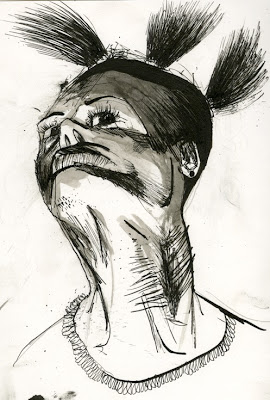 Nobody wants to play chess against Casey Kresh. It’s not that she’s good. She’s phenomenal, but that’s not the reason. For a true connoisseur of the game it would be an honor to play against such a talent. That is, if it resided in anyone but Casey Kresh. She plays the game as if staving off a nightmare – eyeing the board with fierce desperation from across the ridge of her chin, knotting the muscles of her neck, snatching up pieces with fingers like talons.

In the rigid grip of her tibbly fingers, every piece is equally expendable. She spends lives extravagantly with no apparent aim, forcing the game into arcane configurations no chessmaster in his right mind would ever familiarize himself with. She digs herself out of these holes as a ghoul scrabbles free from a grave. She twitches, wheezes, hyperventilates. Trying to concentrate on a board game with a hundred and thirteen pounds of desperate muscle on the other side of the table is impossibly foolish. All but four of her matches have ended in forfeit. She won the other four, but her opponents from those matches are still revered as heroes. Two even survived.

Casey has always been playing war games, of one kind or another. She was born of an anonymous womb, left to live or die in a word that only granted passage if you carved the way yourself. By the time she was twelve she’d slashed so many grown-up hamstrings that she had to relearn knifeplay again from scratch when the growth spurt hit. From then to now, her life has been one screaming, white-knuckled brawl. Somewhere along the line, she taught herself to play.

This is why the patrons of the Blue Tip tolerate her night after night, as she sits shaking by the chessboard: Because this is the retirement she’s earned, and no one dares question the absurd constraints she’s seen fit to impose on it. Though no one is stupid enough to sit across from her these days, Miles the barback cautiously keeps her bowl of peanuts full, and she always has something to drink. But fear isn’t the only thing that keeps the chair across from Casey empty. Every patron knows the old quip about the only winning move. With Casey, though, the saying’s different. For Casey, after years of winning fights by force and absorbing the violence in her victims’ blood, the only winning move is not to win.