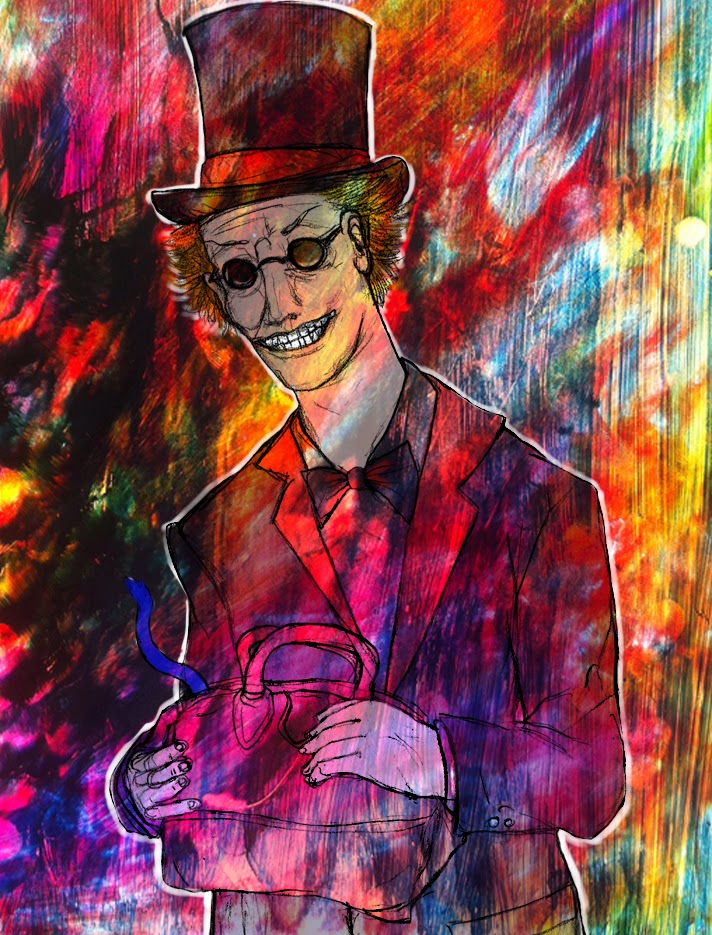 If you save for retirement and invest wisely, obey the posted speed limits, jump no turnstiles, wake in the morning, sleep at night, and do it dreamlessly … then you have clearly never met a man named Tennyson Grinn.

He is tall to the point of absurdity, and augments the effect with a stovepipe hat, from beneath which strawlike hair tries desperately to escape. He dresses like an inappropriately cheerful undertaker, or a second-chair jazz musician in the orchestra of hell. And the smile. Dear god. It is not a Cheshire smile. That cat stole Tennyson’s Grin, and he sued the crafty feline for copyright infringement and won, hasn’t worked a day since. At least that’s what Tennyson will tell you.
His clothes are a heap of lies, of purely technical truths. He wears no shirt beneath his coat. The triangle of dress shirt that bears his bow tie is just that – a charefully cropped cravat with buttons down the front, matched by the two disembodied cuffs poking out of his sleeves. He is totally bald – the strawlike hair is glued to the inside of his hat brim. The lenses of his glasses are painted black, and he is blind.
Tennyson is a traveling salesman, and his product is madness. He criss-crosses the country, turning tinkerers into mad scientists and painters into artists. He is seldom remembered and never paid. But anyone, from coast to coast, night to day, palace to prison, would recognize that smile.